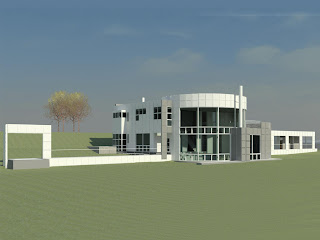 In the first project, it was rather difficult adding cladding to all of the walls, so I worked on some methods within a program using Revit API to automatically accomplish this task. 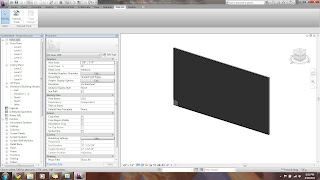 I began with a straight wall. The Ids of the wall and the cladding element (at the corner of the wall) were brought into the program and set as variables.
The only parameter values needed from the wall were its length and height. 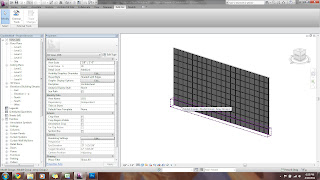 Revit has a LinearArray class, which was used to fill the wall. The number needed in the array was determined from 2 variables. One used the wall length divided be the clad width, and the other used the height of both and performed the same calculation.
An array along the length was created first. Next, this array is stored in a variable and used to create the second array, filling the height. 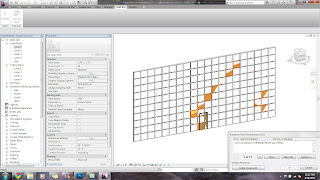 An issue with the array is that all of the elements are stored in their array groups. If some elements are unwanted, i.e. those over the door, then attempting to delete them causes sporadic problems with other elements across the wall as shown. I attempted to also run this for a curved wall. Revit has another class called the RadialArray that would need to be used in this example. Unlike the LinearArray, which uses a location point, the RadialArray uses an angle in radians. The issue with this class becomes apparent during execution. Arrays work from the element's center, and arraying from the cladding's center causes the array to miss its wall host, deleting the elements. To fix the code, the user would need to open the class, which is not available. 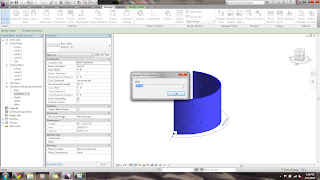 Getting the wall and cladding Ids for the program 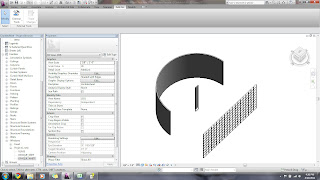 Other methods were tried to fix the RadialArray. I tried to change the cladding's location point before the array to the wall's center, but since it cannot leave its host, it was unsuccessful.
A smaller wall host was put at the curved wall's center with cladding. The idea was that when it is arrayed, the cladding would have the curved wall to host into; however, this was also unsuccessful. 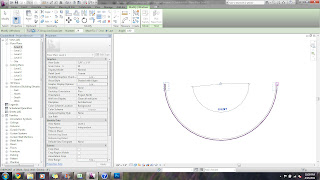 The current solution for curved walls is to manually array the length, since the rotation location point of the cladding can be moved to the wall's center. 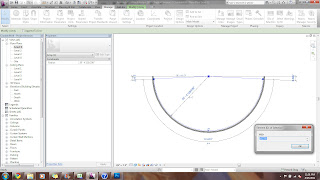 Then, either manually array the height using the first array, or select all elements of the array and input them into the program to allow it to array the second one. 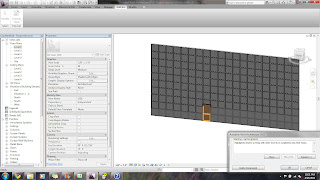 Another method was tried eliminating arrays.
Instead, two for loops are used, one for length and one for height. They are set to run to the length of the wall's length and height from the variables already calculated in the other program.
The wall's location point is found and set, which is where the cladding knows to begin filling in. These location points are XYZ coordinates.
With this method, the elements remain as individuals and not as a part of a group, so deleting individual cladding elements is not a problem when replacing them with doors or windows.
A step further adds an if statement to the code that causes the loops to jump over the location points of door or window ids that are sent to the program, eliminating the need to go back and delete unwanted cladding.
Posted by Kristen at 12:23 AM No comments:

Email ThisBlogThis!Share to TwitterShare to FacebookShare to Pinterest
Labels: http://3.bp.blogspot.com/-8IpF-n94KVw/TbZ18ZEh4YI/AAAAAAAAAgM/RVoBiU2hmsc/s1600/Loop2.jpg Modeling Richard Meier's Grotta House was relatively easy to accomplish in Revit. I began by modeling the wall layouts from the plan with all interior doors before moving to the details that really make this project interesting. In looking at a picture, it is clear that new window and door families need to be created to achieve the overall look of the style. The design is based on the number '3' and is used throughout all aspects of the project. The most obvious is his use of a 3' X 3' square for the exterior cladding. Shown below are several diagrams illustrating how families are set up.


Diagrams
The first family consists of the simplest part of the design,
the square (screenshot 1). This square is given material parameters of white, grey, or glass. It can be used as the exterior cladding, or as a window element. It serves as a nested family in the second family shown to the left of it.

This family begins with the creation of a large window that can change in width or height. The first family square is inserted below and is arrayed. To change the number of small square windows to always be consistent with the large windows width, a formula is set to the array: Ribbon window array=Width/3'

Many different window types are created from this family setup (screenshots 3 & 4). As shown in the second screenshot image, the ribbon windows can be changed to the cladding if needed. 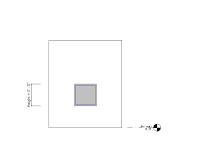 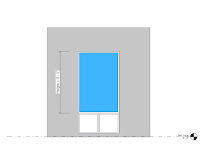 Screenshots from left to right : 1,2 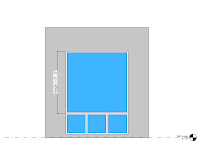 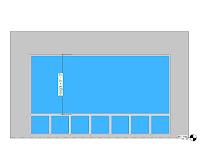 Screenshots from left to right : 3,4

Interior Shot
In moving to the door design, I realized that my original 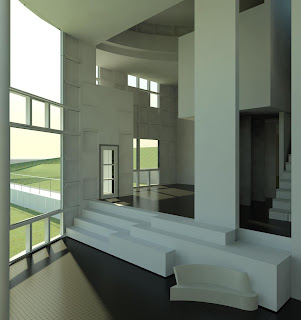 square family would have been more useful if I had created it under the generic template. Therefore, I was unable to nest my square family into my new door family. Overall, the families do work well in the project.

The cladding (first square family) is inserted into a wall and then arrayed to make placing the cladding less tedious.

One other imperfection to note of the second window family is that the glass is not curved as it is in the real project on the front wall. I'm not sure how to fix this within Revit except to create many individual instances within the project to create the windows. This could be done by the use of individual voids and then extrusions for each individual window and frame.

In finishing the project, I set the correct roof levels, as they were all differing heights. I created a topography relatively close (from what I could tell in slope from an image) to the existing. Additional pathways and other site features were added. Other needed materials for exterior walls, without cladding, and interior floors were painted for the finished look.
Posted by Kristen at 12:37 PM No comments: